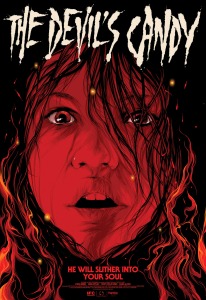 Ray Smilie (Pruitt Taylor Vince) is a middle-aged, tracksuit-wearing man living in an old farm-house in Texas with his parents. Tormented by a sinister voice in his head, he tries to drown it out by strumming power chords at high volume on his electric guitar. When his mom makes him stop, he responds by hitting her with the guitar, causing her to fall down the stairs.

Jesse Hellman (Ethan Embry) is an aspiring, perspiring artist and metal-head reduced to painting a butterfly mural for a bank to make ends meet. He, along with his demure wife Astrid (Shiri Appleby) and metal-head daughter Zooey (Kiara Glasco), are in the market for a new home. Ray Smilie’s is now up for sale at a bargain price, following the tragic death of his parents. Hellman buys the house, and moves in with his family.

Smilie, now living in a hotel, continues to be haunted by the diabolical voice in his head, but…after a noise complaint, can no longer drown it out without drawing the attention of the local sheriff.

Soon, Hellman is hearing a voice as well, but for him, it becomes the impetus that drives him to create works of art with a quality far beyond anything he has achieved before. After he turns his butterfly painting into a hellscape of tortured children, he earns the praise of a prestigious gallery owner, and the promise of riches and success. With fame and fortune must come sacrifice…

Meanwhile, the voice drives Smilie to acts of destruction, not creation, as he is drawn back to his lost home, forcing Hellman to act to keep his dark muse from becoming the downfall of those he loves most.

While The Devil’s Candy initially appears to follow the standard young-couple-moves-into-a-haunted-house formula, it quickly turns into a much more interesting tale of temptation, deviance, and redemption.

The movie’s emotional core is the relationship between Jesse and his daughter Zooey; neither quite fits the mold that the world wants to cast them with. Their dedication to each other, and love of hard rock, is demonstrated effectively by Ethan Embry and Kiara Glasco’s strong performances.

Mr. Vince, as Ray Smilie, is his usual creepy self. Ms. Appleby provides a quiet but strong performance as the somewhat more straight-laced member of the Hellman clan. Also portrayed well by writer/director Sean Byrne is Texas itself, with Jesse’s painting and the pounding rock soundtrack showing the grungy, sweaty side of the state. That’s in contrast with Zooey’s Polo-preppie classmates at her new suburban school. Featuring a unique style and a fresh take on an old genre trope, The Devil’s Candy is an easy recommend. 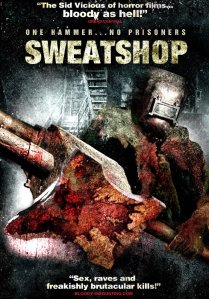 Mary is a high-school girl who looks like a hotter Natalie Portman and gets horny when she watches horror movies (where was this chick when I was growing up? Or now, for that matter). She also suffers from nightmares and dangerous bouts of sleep-walking, so her dad locks her in her bedroom at night and won’t let her go to horror movies. Despite the ban and after wishing her dad would “just go away”, she goes with her friends to see super-popular but cheesy horror movie “The Wisher”. This movie-within-a-movie is about some kids summoning an evil dude that grants wishes but, of course, twists them around to be horrible. During the movie she pukes and runs out. Also, her dad finds out where she is and goes to get her, managing to get into a car wreck and dying on the way. Mary blames herself and starts seeing The Wisher around the house. Then she wishes she didn’t have to go to school, and someome burns down the school. After some more fishy wishing business, she goes to the googlenets and finds reports of strange behavior by some people who saw so the movie. Is she crazy? Are the wishes coming true for supernatural reasons? Or because someone else who saw the movie is making them come true? These are truly the most important questions of our times.

So, this started well, with hottie Mary telling her guidance counselor (an increasingly puffy Ron Silver) about her horror movie turn-on. I really thought this was going to get into some fun and twisted territory, but unfortunately this plot-line got dropped really quick and apparently was only there to give her the impetus to disobey her dad and go to the creepy movie. So, this turned out to be a much more conventional story with some Scream-like sensibilities, which kind of makes sense given that this came out in 2002, when the scream series was still rolling out frequent sequels. While nothing special (other than the cuter-than-a-button Mary and some good but non-Mary titties), it was a decent straight-to-video production with a few good moments. Really though, I am now inspired to find the actress that played Mary and make the kinky masterpiece that this could have been if they’d followed through on the promise of the opening plot-line. Anybody want to give me a million or two to fund it?

Teen Hilary (played by cutie-pie Makenzie Vega, aka Grace Florrick from “The Good Wife”) has just found out her boyfriend is cheating on her with a hot blonde cheerleader. Then she gets into a fender-bender while driving her mom’s new shitty Nissan Sentra. Not a good day for her. She goes home and gets grounded while her bitch-ass parents head out of town to see some stupid show or something that Hilary has been really wanting to see. Then her lame-ass friends show up and surprise her (literally) with pizza and no beer. And it turns out that the guy that rear-ended her (with his car, perv) is a serial killer who is now stalking her. Really not a good day for her.

So, this was well-made and sort of entertaining, but it’s not old-school or new-school enough to be all that interesting. At best, it’s a very bland blend of the two. Throw in some poor decision-making and you’ve got something that’s really not worth your time, unless, like me, your time really isn’t worth all that much. Oh, and one chick takes a bath and Hilary takes a shower, and no boobs in either scene. That, my friends, is unforgivable. If we’d seen some Makenzie boobies, I would have bumped it up to 6, maybe even 7. But “gratuitous nudity” (like that’s a thing) is on the outs these days, so we got nothing, not even a little side-boob. Fuckers. 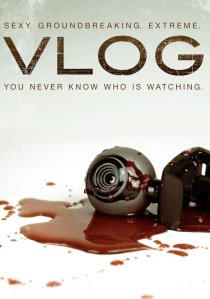 We open with obnoxious but popular (presumably because she likes to sit around in skimpy underwear) cam girl Brooke Marks (the spot) being murdered live on the internets. Then we get the whole “6 weeks ago” or whatever business, and find out what a twat-waffle she is while she goes around picking up guys in bars and hidden-cameras them for her shitty vlog, all the while ridiculing and bitching about them, and then getting all salty when some guy denies her friend request. So I can’t imagine why anyone would possibly want to murder her. Soon she receives an anonymous voice mail directing her to some video clips online of her friends being horrifically murdered. The exploding bong was especially nice! She goes to the cops with the video and the investigation begins, and some more people die, and there’s a twist that you can see from a mile away.

So this was pretty well-made and acted, and Brooke Marks is pretty good as Brooke Marks. Is she really that obnoxious in real life? The plot was rather boring and predictable, but there were a couple good kills (that bong!). If there’d been Brooke boobs, I’d give it a solid 5/10, but there were no Brooke boobs, or any other boobs. Yeah, I know, horror filmmakers just don’t know the business anymore.

Opening scene: It’s the 1950s and a sadistic serial killer is about to be executed for his crimes. Some shit happens, he kills a couple of guards and almost escapes, before finally being fried in the electric chair.

Cut to: Some young’uns are going camping and lock their cellphones up in the van’s glovebox (could this possibly be relevant later?!!!) As they drive past a cemetary, one of the girls says everyone should hold their breath because spirits might be roaming around and get sucked in as they drive passed. She says this is a thing, but nobody else in the movie has ever heard of it, but of course it must be a thing. Everyone reluctantly agrees, but the pot-smoking dudebro coughs on his pipe and ends up sucking in the serial killer’s spirit, dooming everyone to a horrible, painful, and somewhat entertaining death.

So, first, when Katrina Bowden is only the second-hottest chick in the movie, you’re in good shape babe-wise. The hottest chick seems to be dressed like Lara Croft for some reason, but I’m good with that. Later she is naked in a completely gratuitous (best kind, obviously) sex scene. There’s also some other nice boobs. Plot is bog-standard but executed (heh) well enough. Worth a watch for boobage and a couple of silly but impressive death gags. I gotta knock it for too much CGI gore though, that shit just don’t look right.

Or at least that’s what the description says. All I saw were a bunch of random events that seemed disconnected and nonsensical. This was directed by Alan Smithee, who I’m not all that familiar with, but apparently he’s made a LOT of movies over a long period of time, and they’re pretty much all bad. He must be like a hundred or something by now. Anyway, add another one to his “winning” streak!

The only good part was this one chick getting stabbed in her fake boob. And they were brand new too! That’s gotta suck. Also, Kane Hodder and Bill Moseley are in this, but unfortunately even they couldn’t save it from Smithee’s shaky hands. 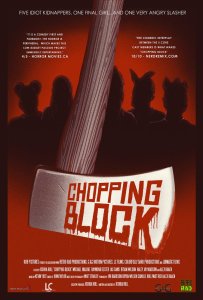 A group of incompetents just laid off from their cubicle jobs decide, after many drinks, to kidnap and ransom their ex-boss’s daughter. They actually end up saving her from a huge, deranged woman that’s been trying to kill her for years, and the killer now comes after all of them. Many more drinks and inept decisions follow.

This low-budget horror-comedy was freakin’ hilarious. Think “Office Space” with more kidnapping and murdering. Good performances all around make this one a quality effort, and the depth of idiocy of the protagonists is impressive. Very silly, but highly recommended.

Creepy dude runs a tanning salon and kills his young female customers. His creepy wife then makes handbags out of them. I think some other stuff was going on too, but I wasn’t really paying that much attention. The 5/10 rating is for the copious nudity, not for the plot or production values.